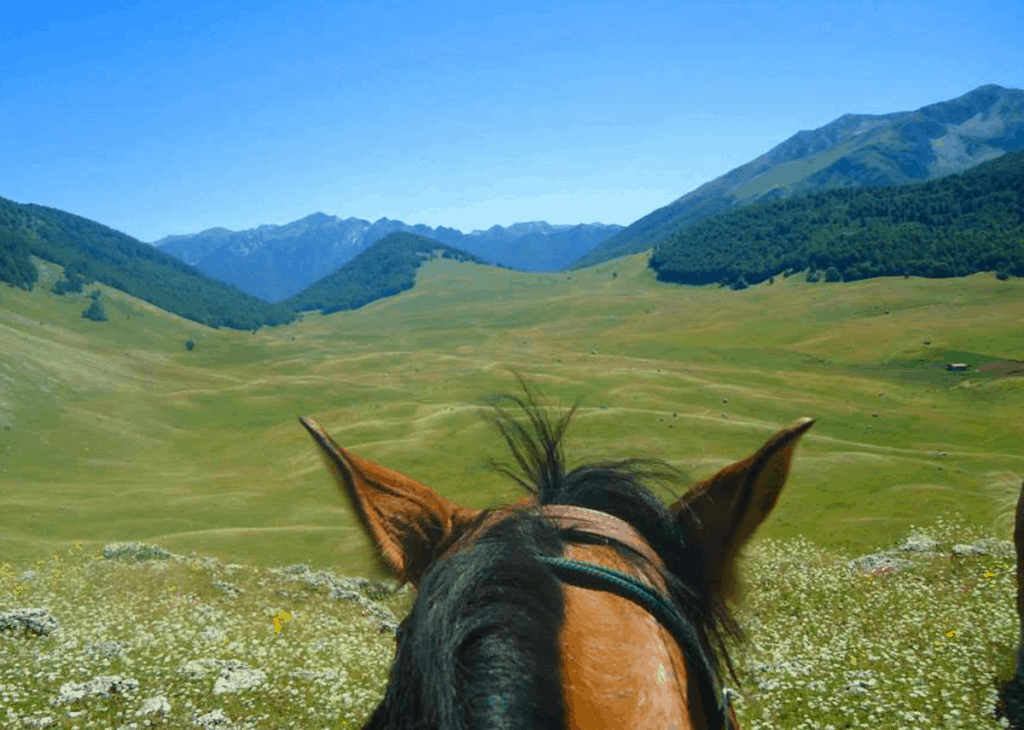 Once upon a time, there was a long, winding road from Ortona to Gaeta, in Italy, that was used during World War II by the English and American armies. General Patton started his march in Italy from Sicily, heading North, and it took him 5 months to get a good hold of it, because of the German troops. General Kesserling was put in charge of this road that was mostly safe from air raids because it went through mountains, impenetrable valleys, rivers and rocks. This imaginary line connecting the Gaeta gulf, the Garigliano and Sangro rivers, Pescara and Cassino was called “Gustav Line“.
Every year, a group of horse riders climbs this same road, to honor the beauty of this area and all the soldiers who died here. It’s a different way to travel in Italy, looking at it through the ears of a beautiful horse. Fernando, from Crete Gialle, plans everything at least one year in advance, to make sure that horses and riders can have a safe trip. If you’re spending three of four days in Rome you can easily add a day trip to Crete Gialle, it’s easy to get there using the train! 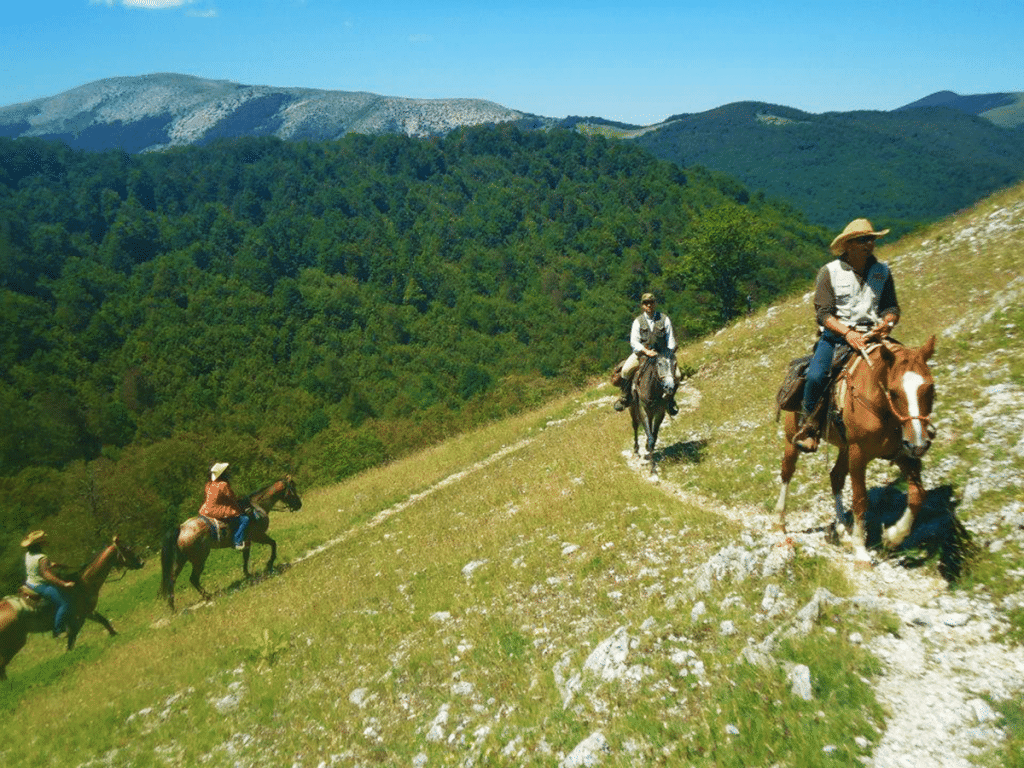 The horses pant as they climb up the ridge on the way that goes from the Mainarde mountains to mount Marrone, one of the most difficult parts of this trip. To get up to the mountain pass, the riders have to be extremely careful to guide their horses on safe paths: no one speaks, all you can hear up there is the rustling of leaves, rocks rolling down the ridge, the wind singing its song. The silence is not only due to the difficulty of this part of the journey, but it’s a way to honor the soldiers, some as young as 16, who fought, suffered and died on this road, trying to bring peace into a world that was tortured by a horrible war.
The idea of riding along the Gustav Line started as a way not to forget what took place here, and at the same time to explore this wild part of Italy in a different, eco sustainable way. Crete Gialle, a small family ranch between Campania and Lazio in Italy, created and promoted this event a few years ago. From the 3-11 June, a good nine days on horseback, riders from all over Europe meet in Ortona to challenge themselves on this long, windy road. 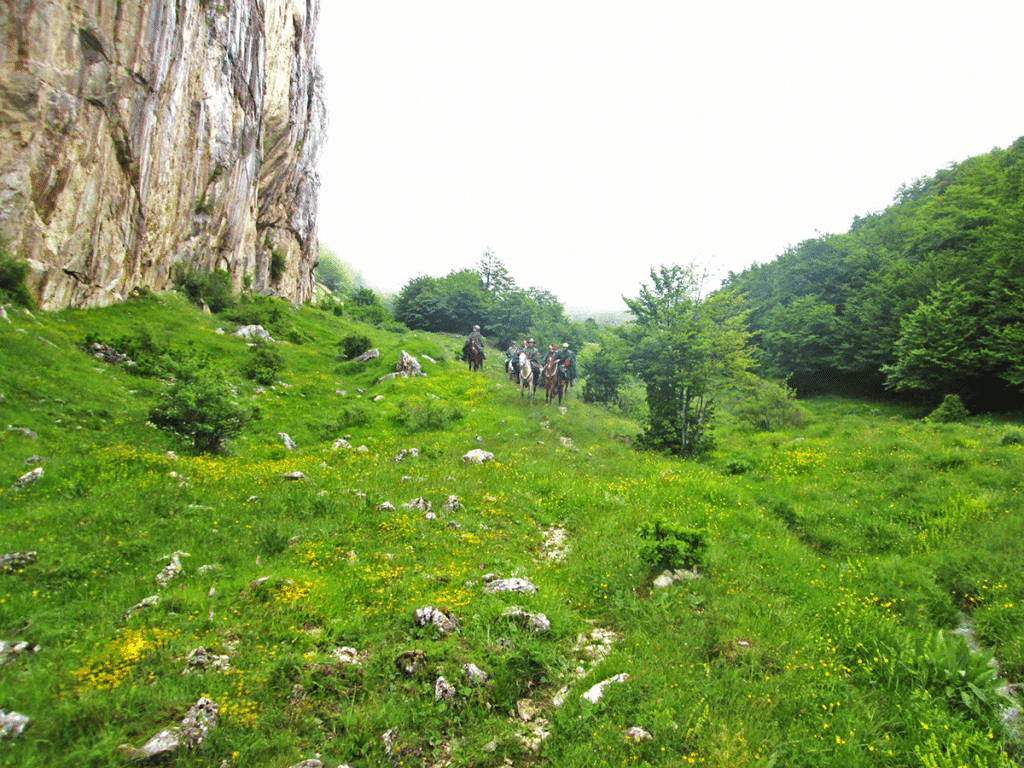 Exploring the Gustav Line in Italy on horseback means that you can rediscover the relationship with your own horse, and also with nature. Even if you can’t bring yours, Crete Gialle and the Federal Guide FITETREC–ANTE, Fernando L’Arco, will make sure to find you the most suitable companion for what will be the adventure of a lifetime. It is a way to see, from up your saddle, the place where history was made, where the Allied forces fought against the Nazis for every inch of land, while the horrors continued in camps like Auschwitz and Birkenau.
The Gustav Line is never crowded: it’s you with your brothers and sisters, both two and four legged. Fernando L’Arco planned this trip for the first time four years ago. 2017 will in fact be the fourth edition of a real adventure, the first of this kind in Italy and a great chance to thank the over 300.000 soldiers who died here. The number really does make your head spin, right? I’m ashamed to say that I’m Italian and still I didn’t know much about the Gustav Line. We don’t get to study this story in our history books and that’s exactly why Crete Gialle is trying to spread the word, making sure that brave riders get the chance to explore this land, going through valleys, rivers, mountains, little burgs and military cemeteries. 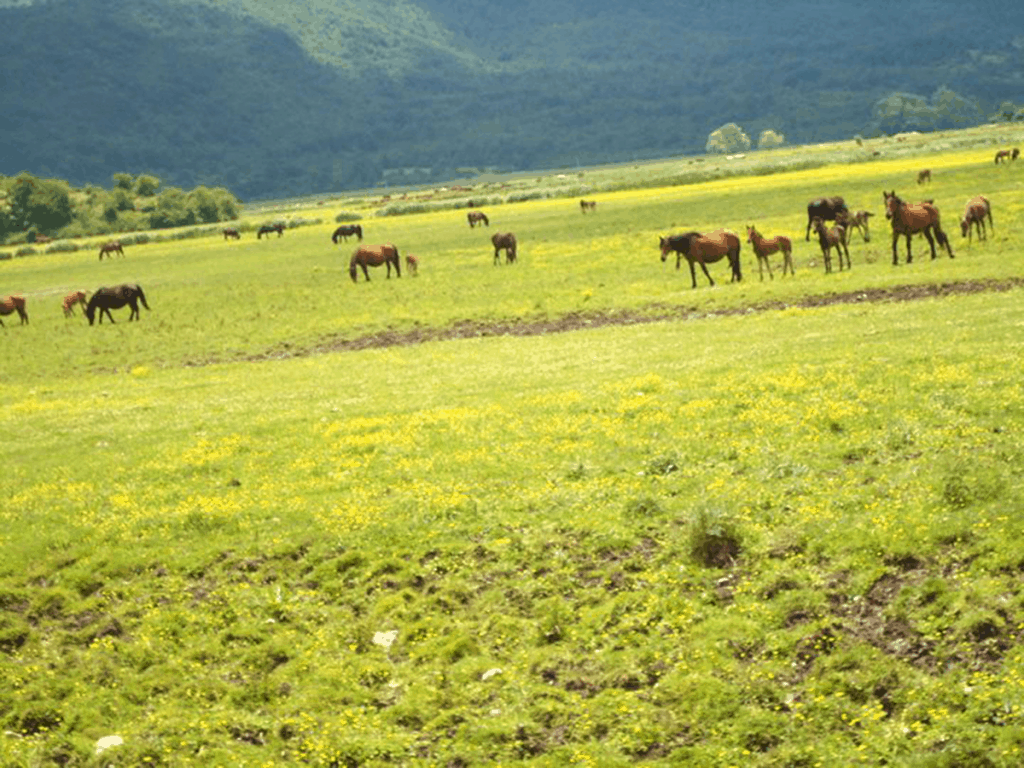 As I already mentioned, the journey starts in Ortona, a Medieval town that was almost entirely destroyed during World War II: most of its population was forced to run away as the town was bombed continuously for at least six months. 1314 soldiers died here to free the city from the Nazis. The city was given a Gold Medal for Civilian Valour after the war.
The riders will then move through a beautiful valley between Chieti and the Sangro river, to another tiny town occupied by the German troops, Orsogna, and then, near the borders of the Majella National Park, on a nice hill overlooking the area, they will visit Guardiagrele, one of the most beautiful burgs in Italy. Gabriele D’Annunzio said that this town was the terrace of Abruzzo region, because from here you can look over the valley to the Adriatic sea. 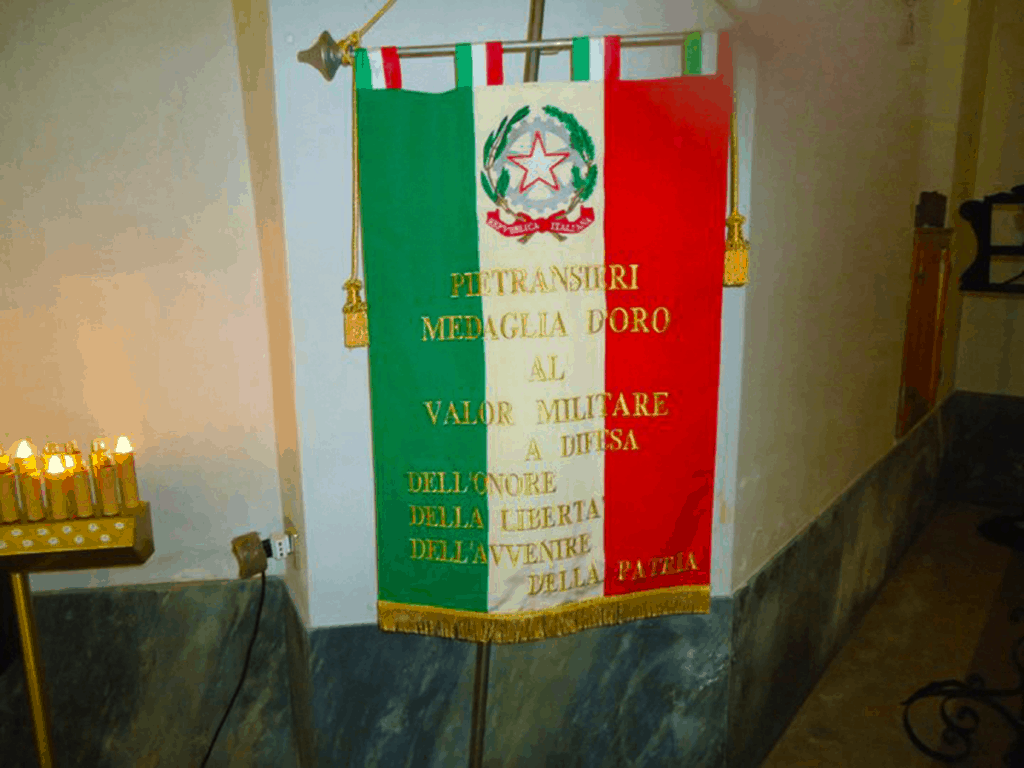 Riders and horses are then guided through the Majella National Park, in the green heart of Abruzzo region, with good chances to see the wildlife living there. Horses, in fact, don’t scare away the wildlife as a car would, and they allow the guides to take scenic routes only accessible to hikers and riders. From this park the convoy will move to Roccaraso, which is one of the most famous and beautiful mountain cities in the South of Italy, a paradise for ski lovers in Winter and for those who love the quiet of nature the rest of the year.

As days go by, many of the most beautiful medieval burgs in Italy will be visited, from Acquafondata to Sant’Elia Fiumerapido, to the awesome Cassino with its Abbey. The bombing that destroyed a good part of this ancient religious building, killing soldiers and monks alike, is just another shameful mishap of the battles that took place in this area for long months.

The arrival has been set over the Garigliano river that divides the Lazio region from Campania: crossing this river, in fact, there’s the Tyrrhenian sea. 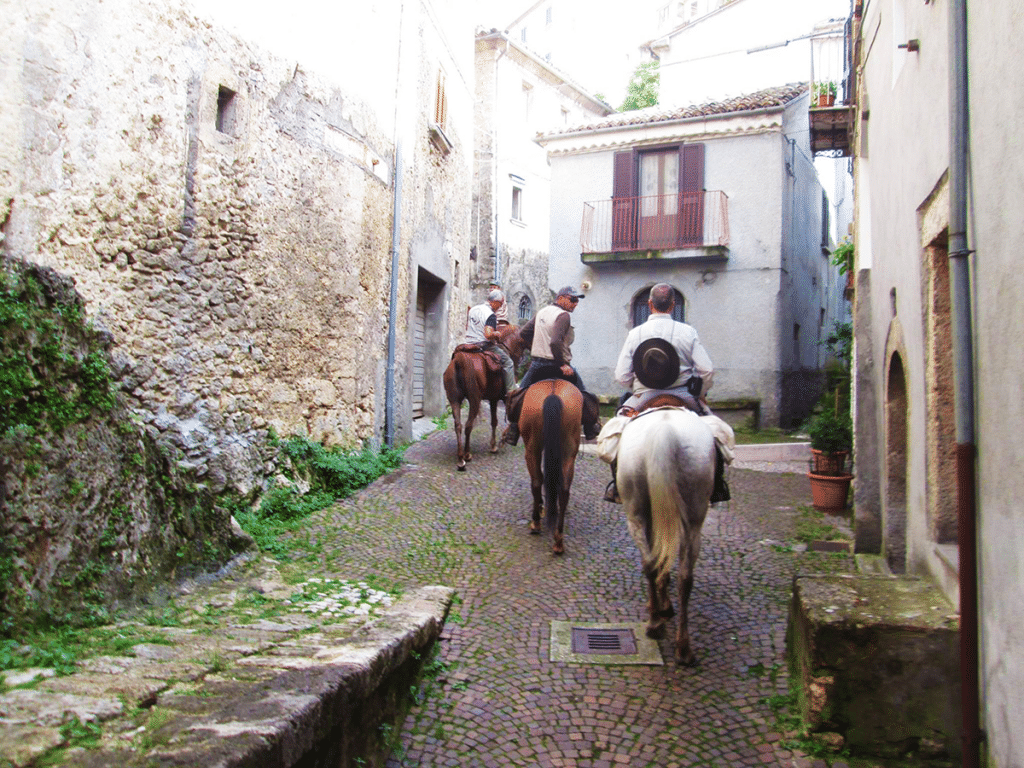 The Gustav line journey lasts 9 days. The participants will ride for about 25/30 km per day and only the 15% of the whole route will be paved. While the first two and the last two stops will be pretty easy, the rest of the trip will be a bit more difficult because of the mountain paths. That’s the reason why it’s important that the participants are a bit more experienced to take part to this long adventure.

The guide, Fernando L’Arco, can be contacted through my blog (send over mail that I will translate and forward to him) for requests or bookings in English, and to the official mail address info@cretegialle.it for those who can speak Italian.

Have you read our latest adventure on horseback? We crossed the Apennine in Tuscany! 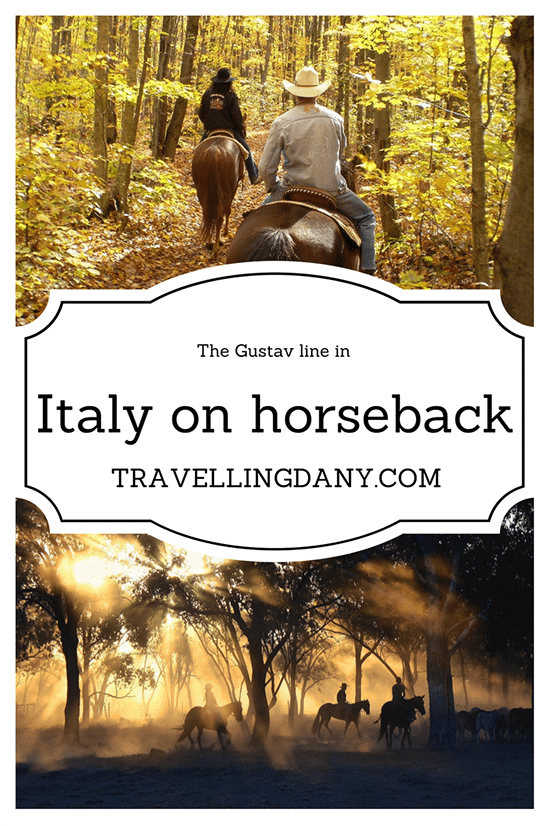 « Upper vs Lower Antelope Canyon (which one and why?)
One day in Naples (self-guided walking tour + secrets from a local) »