One of the things I’ve had on my bucket list for the longest time was to see the Fall in the Adirondacks.

The idea of exploring wonderful forests dotted with red, yellow, green, and orange patches – a real masterpiece that you can only see once every year – sounded pretty enticing.

Although many Italians head to Maine (USA) to see the Autumn foliage, I read that the Fall foliage season in the Adirondacks lasts longer than other areas of the United States of America.

From September to November, a remarkable window of time, considering how short it can be in other areas! That’s why, when the Lake Placid Tourism Board invited us, I immediately said yes: challenge accepted!

But what is the main highlight of the Fall in the Adirondacks, exactly?

The term “foliage” refers to a natural phenomenon. The leaves of the plants are green thanks to the chlorophyll, which is produced by capturing the light and using it to feed the plant itself.

When the Summer season ends, the days become shorter and the “veins” inside the leaves become smaller and smaller until they close, as if adding a cork at the base.

Chlorophyll then begins to degrade until it is completely transformed: at this stage the leaves change color, becoming yellow, red or orange.

In the United States, this phenomenon mainly occurs on the East coast, and specifically in the North, where temperatures drop in Autumn and Winter. According Garet Livermore, Executive Director of Great Camp Sagamore, they can get as low as -40° C!

This is to warn you that you won’t find red and yellow leaves in Florida, but you can certainly visit for many other reasons, not just have fun in Miami!

Beeches, sugar maples, red maples, aspens and birches are almost everywhere on the forty-six peaks of the Adirondacks. These forests are not only beautiful to explore, perhaps during a “forest walking” experience, but also … good to eat!

This is really one of the best quality we ever tasted, so much so that we decided to buy a bottle to take home: it’s almost too good to be true!

Since this is a natural phenomenon, it is almost impossible to choose a specific date to plan a “fall foliage trip”.

Unfortunately, this year a series of hurricanes and natural catastrophes, perhaps due to global warming, have brought death and destruction in many areas of our planet. We live in a tremendously delicate and sensitive ecosystem, so even Fall foliage has suffered the consequences.

After a particularly promising start, in fact, the rise in temperatures reopened the “veins” inside the leaves, blocking the normal metamorphosis process.

Raquette Lake was as hot as in August. Saranac Lake… too. We had a bag full of photographic equipment, hiking boots and autumn clothing. Full disclosure: we were very scared we didn’t have enough light clothes with us.

We were ready to go for an intensive shopping session, thinking we had completely messed up our plans, when everything changed.

Temperatures collapsed overnight, going from an average of 32° C to a minimum temperature of -2° C, with maximum temperatures that never went above 14° C. An absolutely abnormal thermal excursion, which left us baffled… after all, we aren’t quite used to it!

The best way to deal with a trip in Fall in the Adirondacks is probably pack some light t-shirts, long-sleeved cotton shirts, a heavy hoodie and why not, maybe even a fleece shirt!

Layering is, once again, the best strategy for being ready for almost everything.

The Adirondacks are lesser known than other popular areas of the US, at least here in Italy. Yet not many people know that the concept of “vacation” was born right there.

In the early 1900s, those who lived in the cities began to realize that heat, pollution, and frequent illnesses were all concatenated.

The rich classes then started to spend the Summer away from the city, on the Adirondacks, where fresh air and tranquility seemed to keep the most pernicious plagues at bay.

The Adirondacks Park protects 85% of the forests on the East coast of the United States, and is larger than Yellowstone, the Everglades, the National Parks of the Glacier and the Grand Canyon together.

Unlike other National parks, though, there is no entrance gate and you won’t have to buy a ticket. The park is in fact a  patchwork of public and private lands, on which very few people live.

Just think in some areas, like the ones ones around Lake Champlain, it’s absolutely normal to have to drive almost 50km to find a mall… or even a movie theater!

The forests in Fall in the Adirondacks, dressed in yellow, red and orange, are in fact protected by a series of strict rules that won’t allow the opening of large shopping malls or intrusive billboards: even the usual Starbucks sign is scarce in the area.

We found this to be a good thing, as it helped grow many small local alternatives, much more interesting.

Some even prepared a good espresso with an Italian grinder, that we enjoyed with warm and fluffy muffins, or family-run diners, or even small self-service shops with products coming directly from the farm: we certainly didn’t miss any of the “big players” during our trip.

The first areas where the foliage appears are the forty-six peaks, including Mount Marcy, the highest mountain in the state of New York.

So any trip to discover the Adirondacks Fall foliage should probably start from the High Peaks, possibly from the small town of Lake Placid on Mirror Lake.

Then you could move to the lower areas, preparing a loop itinerary that, in case you’re flying there, will bring you back to any of the big New York airports.

The Adirondack region lacks a big airport, and public transport is reduced to bone. In order to explore this area, it’s absolutely necessary to rent a car.

Fall in the Adirondacks, however, makes even a long drive interesting. There are in fact many scenic roads crossing the forests, just like the Blue Ridge Road, that goes from North Hudson to Fort Ticonderoga and then to Newcomb, or the Black River Trail, which on the third Saturday of September organizes the Cream Cheese Festival, with cheesecake, cheese danish, stuffed bagels and many other cheesy treats. In short, driving in this area is never boring, especially during the Fall!

In between the many things to do for your Fall in the Adirondacks, hiking should be high on your list. There are hundreds of very beautiful trails, as well as highlights like the Ausable Chasm, also called “The Grand Canyon of the Adirondack”.

In case you don’t feel like hiking (even if you should, we loved it!), then I recommend the Whiteface Veterans Memorial Highway. This scenic road will take you to the top of Whiteface Mountain.

It has scenic viewpoints small parking spots and some picnic tables where you can have lunch with a breathtaking view.

The last stretch, that leads to the highest point of the mountain, can be reached by a lift or by the stairs. The entrance to this panoramic route is included in the $ 35 Olympic Sites Passport, which includes the entrance to the Olympic Sports Complex, the Olympic Jumping Complex (where you will have access to a sky deck at the top of the ramp), and the Olympics Center, an interesting Winter Olympics museum in Lake Placid. In Winter you can even enjoy some ice skating (maybe with a hot chocolate, since I think you’re going to need that!).

When the Adirondack lakes aren’t frozen, people love to go kayaking. The area has a very ancient tradition of building wooden kayaks. If they aren’t your thing, you could go through this list of inflatable kayaks that are way easier to transport over there.

With the Olympic Passport, in addition to a series of discounts for other attractions, you can also access the “Gondola ride” (nope, they’re not shipping you to Venice!) and the Oktoberfest (held every year between the end of September and the beginning of October). Needless to say we immediately decided we had to check out the Oktoberfest!

Of course it was just… you know, to research the facts. Not because we wanted to listen to German music, see the costumes, drink some beer and eat pretzels! Absolutely not!

After all, to access the Gondola ride that will get you on the top of Whiteface Mountain, you have to pass for the Oktoberfest. Be it because of the beer (I’m so not used to drinking) or because the view was truly impressive, I didn’t get scared at all, even if I don’t like heights.

On the top, as a nice bonus, we got to listen to a group playing Alpine horns!

Once you get back from your Gondola ride, it might be interesting to have a look at the stands of the small market at the Oktoberfest: we have found many local products, different types of maple syrup (you can taste them too!) and nice craft objects.
It might be the perfect time to buy some souvenirs!

Since we needed a car, we have been searching online for quite some time to rent a car from New York without having to splurge too much. Click here to see the dealer we rented from. Its prices are by far the lowest you can find online from NYC: the smart move to save your budget for fun activities!

Did you know you can enjoy foliage also in Europe? Have a look at our guide to the best day trips from Edinburgh to see why Scotland is awesome in Autumn!

You might also like:
Adirondack Peaks road trip guide – all the must see spots
20 ideas for a fall trip to Europe
USA Babymoon Ideas on a Budget

This post was written in collaboration with the Regional Office of Sustainable Tourism for Lake Placid. They helped us to plan our trip through the Adirondack Peaks and to make lots of new friends. All opinions are our own. 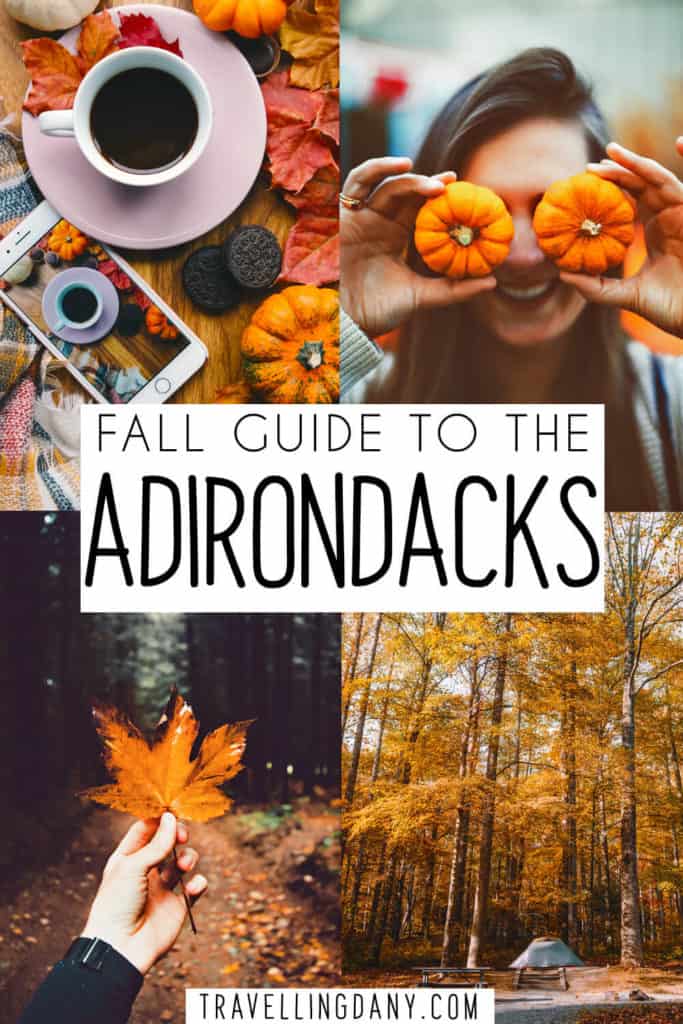 « Autumn in Italy (essential packing tips for the ladies)
The Mansion: best hotel to see the Niagara Falls »