Is there really something like an Italy tipping etiquette? Absolutely yes! Tipping in Italy can be confusing for people who visit from abroad. Most of the times the bill is in Italian, and unless you know how to read it, it’s not always easy to understand if you should tip or if a small gratuity has already been included. I’ve seen so many people struggling with Italian bills: over here we have so many unwritten rules! While in the U.S.A. tipping is mandatory, sometimes Italians feel offended if you hand them a tip. This guide will clear the air about the most common misconceptions about tipping in Italy, while offering useful info you can use for your next trip!

Tipping in Italy: is it mandatory?

One of the things my friends from abroad ask me when they visit is… do you tip in Italy? Should we do it? The short answer is no! It’s not necessary, even if some tourist traps still try to trick the tourists into doing it.

However, in some circumstances Italians actually like to tip even if gratuity (coperto in Italian) is already added to the bill. Let me explain this further.

Tipping customs in Italy might be slightly different from what you’re used to. But there’s one thing we have in common: a particularly nice waiter/waitress needs to be rewarded. We don’t feel “forced” to do it, especially when they deserve it!

Worried you’ll need a bit of help?
Download the FREE Italian Travel Phrasebook here! It includes the correct Italian pronunciation and lots of useful sentences that you’ll be able to use on your trip to Italy!

Do you want the whole truth?
My dad always tips the waitresses whenever he goes out with my mom. He always thinks “that could be one of my girls“.
No one had to teach him the tipping etiquette: it’s just what he feels like doing. Of course he’ll tip waiters as well, but he has a soft spot for waitresses because he’s a dad to two girls.

So when a cameriere (waiter in Italian) is particularly funny, if he offers suggestions on the best Italian dishes you should try, the Italian etiquette states that you can definitely offer a little extra.
Yet you should absolutely never feel obligated to tip!

How to read the bill in Italy

Gratuity in Italy is usually added to the bill. Sometimes a 10-15% extra will be added for your service, and you can find it at the bottom of your bill.

Yet more often than not there’s a fixed price, which is our gratuity, per person. It can be from 1€ to 3€, but then again, it depends on the restaurant. If you intend to dine at a luxury Michelin restaurant of course the gratuity will be higher.

Usually it is indicated with “coperto” or “servizio“. Literally it means that you’re paying for your seat at the table (coperto) or for the service you’ve been offered (servizio). Sometimes the gratuity covers both servizio and coperto.

How to ask for the bill in Italian

In Italy it’s not common to get the bill without asking for it.
Unless it’s Saturday night and the restaurant is full. In that case if you’re being handed the bill, it means that the waiter is trying to tactfully ask you to leave if you’re done eating. They need your table so you can’t linger any longer. Even here in Italy this is a very rude behaviour, no matter what!

Under regular circumstances you will have to flag down a waiter and ask for the bill.
Let me show you how to ask for it.

Let me translate that!

“Posso avere il conto per favore“: means “Can I have the bill please” in Italian (the bill in Italian is “il conto“).

Once you get it, you just go for a nice “grazie” (thank you in Italian).

Italy tipping: but what if I’m accidentally rude?

Trying to decide if you feel like tipping and how much is pretty easy.
Do you think your waiter has done a good job? Then you should leave a little bonus for their service.

There is no set-in-stone rule for tipping in Italy, but we usually leave an extra based on the final bill. It can be an extra 2€ for the café server because he wrote our name on the cappuccino we ordered, or we could round the bill to the nearest 10€, if our waiter at the restaurant has contributed to a lovely night out.

Heck, when we have coffee in Naples (a cup of espresso might cost you about 0.90€/1.10€), Aldo always rounds it up, offering them the remaining coins, just because he finds it’s a nice thing to do!

What we do is try to leave cash, in stead than using a credit card, because that way we make sure that our waiter actually does get the money. Mistrustful? Maybe, but when in doubt…!

You might also like:
– How to plan a Romantic Italian Honeymoon
– How to plan the Perfect Honeymoon on your own
– Abruzzo Food: The Secret Italian Dishes

How do you tip in Italy?

Provided that you have already decided how much (and if!) you want to tip, you should generally leave the money on the bill. Flag a waiter and offer him the bill and your money. Then to make sure he understands he has been tipped, you just say “tieni il resto” (keep the change in Italian). Otherwise they will actually bring you the change!

Sometimes tourists from abroad blatantly push money onto a server’s hand. Or they make a show of leaving them a few bills, to make sure they are being thanked properly.
Please, don’t do that! It’s super rude and very embarassing for the waiter and for the other customers!

Do you tip taxi drivers in Italy?

One of my most used Italy traveling tips is to always agree on a price before the journey begins. So you won’t be faced with bad surprises!
Don’t be ashamed to ask how much it’ll cost you to get to the nearest train station. We do it all the times in Italy and it’s within our right to do so!

I have noticed that some taxi drivers, especially in the bigger cities like Milan or Rome (but it happens also in Naples) are getting spoiled and expect a tip.

Don’t be fooled and let me say it again: tipping taxi drivers is not mandatory!
You should never feel forced to tip anyone in Italy, as it’s not part of our culture. So don’t worry, you’re not being rude, you’re just an informed traveler!

While a simple “grazie” will suffice, there are some people that not only appreciate to get a tip, but also deserve it.

When a bellhop brings your luggage, it is customary to tip 1€–2€ per bag, depending on their size. If you have many bags, just round it up to 5€. Offering more is risky: one person might appreciate it, but someone else might feel offended.

Is your hotel room particularly clean? Were you offered little niceties like chocolates or towel animals? Did you feel at home?
By all means don’t even ask yourself if you should tip in Italy in such cases!

At the end of your stay, just leave a tip for housekeeping. We usually leave about 1€ per day.

While tipping in salons isn’t common, my mom always makes sure to leave a tip for the hairdresser who has taken care of her hair.

The very nice salons in fact will provide coffee or tea, and my mom is always raving about how her salon gives her a nutrient hand cream when it’s cold outside. She feels pampered and thus she gladly offers a tip because… well, they deserve it!

Once again: if you like how they make you feel, then by all means, leave a small tip for the hairdresser. Don’t feel like it’s something you must do!

I have a distant relative who lives in New York City: whenever he decides to visit Italy he feels compelled to tip his tour guides.
I don’t know if it’s an American thing or not, but there’s really no need to.

Tipping tour guides in Italy is of course appreciated, but not expected. Usually if they are very good, we hand them from 5€ to 15€ according to how big our group is.

You are already paying for their services, so sometimes handing a tip comes across as rude!

As I mentioned in my article about the best tours of the Amalfi Coast, don’t ever feel pressured to tip, no matter where you are!

You might also like:
– A taste of Italy – The best regional food in Italy
– Italian Christmas food you should eat on your next trip to Italy
– 30 types of Italian Pizza you should absolutely eat
– 23 romantic Tuscany villages you’ll fall in love with
– Abruzzo Food Guide: How do the Abruzzese eat? 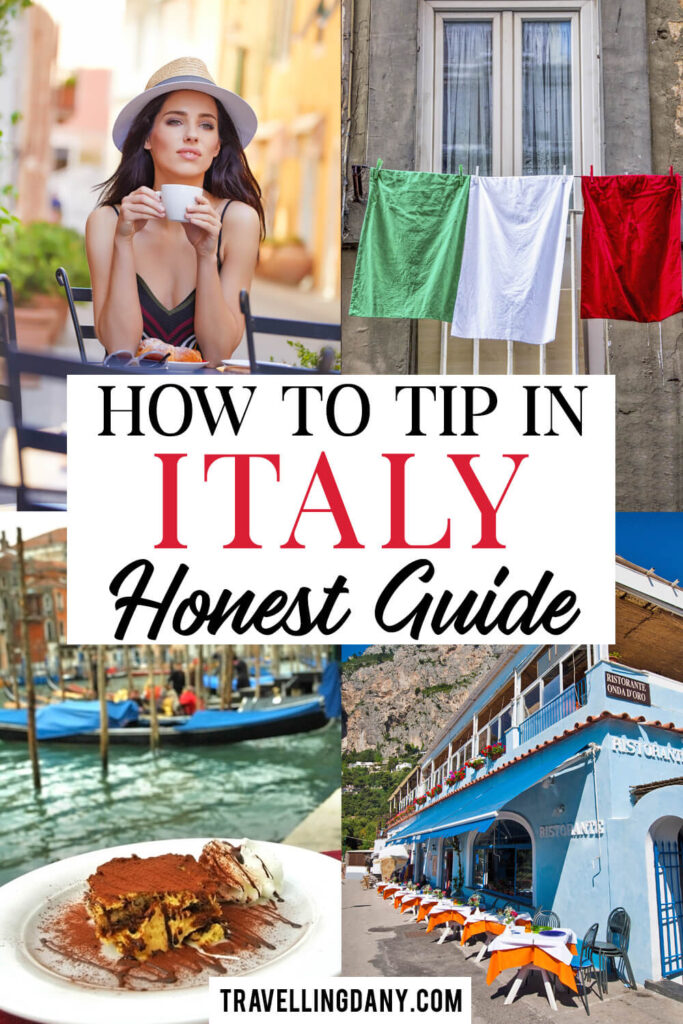